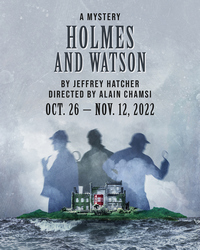 Three years after beloved detective Sherlock Holmes plunged to his death off Reichenbach Falls, Dr. John H. Watson receives a telegram suggesting his old friend may still be alive. The mysterious wire was sent from a doctor who states that three patients in his care have each claimed to be the late Sherlock Holmes. Each matches Holmes’s physical description, but one holds valuable information that only the true Sherlock Holmes could know. Watson travels to the asylum to confront the three patients, convinced that one of them must be the real Holmes. As he investigates, Watson is drawn into a web of intrigue, murder, and surprise that reveals what really happened at Reichenbach Falls in the fateful confrontation between Holmes and his nemesis, Professor Moriarty.

Buy To This Event Directions